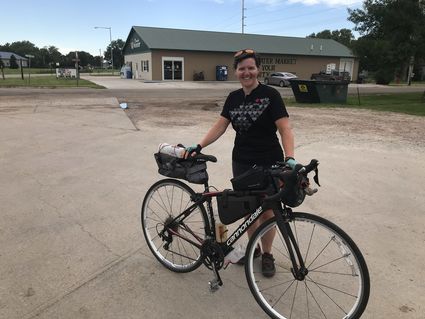 Cross training • Jemma Stilwell, of Lyme, England, ventured through Ewing and Clearwater, Aug. 16, during a cross-country tour of the United States. The music teacher departed Seattle and plans to end in Washington, D.C.

If you want to catch a glimpse of real America, try cycling from coast to coast.

A chance conversation with a group of coffee drinkers at Westend Mini-Mart in Ewing altered Stilwell's route, sending her to the Summerland Advocate-Messenger for a quick visit about her trek.

"I had a bit of a choice to go across South Dakota or Nebraska and Nebraska's flat - very flat - so...