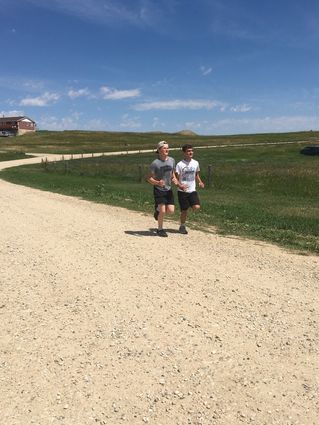 Hit the ground running • (l-r): Eli and Alex Thiele, students at Clearwater Public Schools, train for the upcoming cross country season while in Wyoming by running various routes. The two will be part of the first Bobcats cross country squad.

Clearwater, Ewing and Orchard students will have a new fall sports' option when practice begins Aug. 12.

Cross country will be offered for the Summerland Bobcats, and the squad will compete in class D this season.

Jamie Turpin, an instructor in Clearwater, will lead the team.

The sport is popular across the country.

In 2017, more than 450,000 high school student-athletes participate in the United States alone.

To prepare, Turpin asked athletes to run at least three miles daily, more if they feel like it.

"It is crucial to get up in the morning and run since it's cooler," Turpin said.