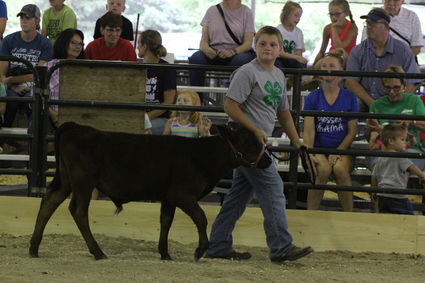 "It's taught me how to get things done," he said.

Sayers has been an independent 4-H member for three years. His interest in the youth program began after he listened to a talk about it at Orchard Public Schools.

"I asked my parents if I could try it and they said 'Oh yeah.'"

This year, he recevied the reserve champion award in woodworking for a Lego table he made.

He estimates the project took two to three weeks to complete.

"I built it for my brother and decided to enter it in 4-H."

His favorite 4-H competition is showmanship.

On Thursday, Sayers showed a bucket calf and received a blue ribbon.

"It's fun to see calves that haven't been in the ring before and see how they act," he said.

Friday, he participated in the poultry show.

"I take a new chicken every year. My egg layers weren't ready for fair this year, so I only showed one."

By Saturday, Sayers was ready to present his 3-year-old market steer.

"I help take care of him throughout the year," he said.

Sayers admits, during the first year, he was trying to figure out what does and does not work.

Now, he believes he understands how patience and determination have given him confidence in and out of the ring.