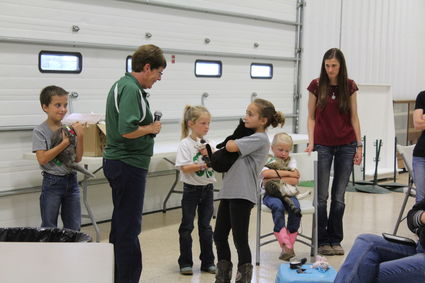 Interview skills • (l-r): Antelope County 4-H Small Animal Superintendent Rhonda Meyer asks Gabby Ahlers, of Clearwater, a question about her animal during the fair's cat show. Clover Kids answer basic questions about their entries and share information about their pets with a judge.

Don't let the name fool you.

Toothless, a black farm cat with a hint of tuxedo white under his chin, has a mouth full of teeth. He didn't bare them to judges during the 4-H cat show at the Antelope County Fair, though.

That's because his presenter, 7-year-old Gabby Ahlers of Clearwater, spent time preparing the animal for competition.

A Clover Kid, Ahlers is growing accustomed to the ins and outs of showmanship.

"I give it a bath, brush him and clean his ears and eyes," she said.

The biggest challenge: bathing him.

Showing Toothless was easier. She used a collar.