Rodeo riders include Ewing on route 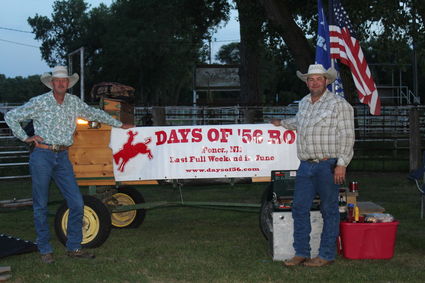 Rodeo promoters • Jerry Stewart and BJ Robinson, of Ponca, spent the evening in Ewing, July 24. The pair guided a team of horses and buggy from Ponca to Burwell, promoting the Days of '56 rodeo.

There was a flurry of activity at Ewing's rodeo arena, July 24.

While cowboys had horses and a mule in tow, B.J. Robinson and Jerry Stewart, of Ponca, used the area as a campground instead of practicing team roping skills.

The two are chairman of Ponca's Days of '56 rodeo and were en route to Burwell for Nebraska's Big Rodeo.

Plans were to arrive in Burwell Friday evening, in time to promote Ponca's 51st rodeo.

While this was their first adventure, two committee members made the same trip in 1967.