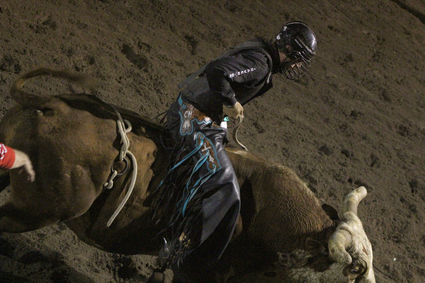 Riding high • Conner Halverson grasps the reins during his second ride of the evening at the Clearwater Rodeo. Halverson claimed a $1,000 prize for making it to eight seconds on the bounty bull.

A decade ago, while his friends were off riding bikes, eight-year-old Conner Halverson was riding bulls.

Hearing about and watching bull riding on TV when he was younger, led Halverson to pursue this dangerous career route.

Halverson is the son of Marika and Eric Halverson. The 17-year-old will be a senior in high school. Conner was the winner Friday night winner of Clearwater's Big Rodeo's bounty bull. The rookie was able to stay on the bounty bull Friday, June 28, earning a total of $1,000 from this bull.

The cowboy said, "It was a well-run rodeo and I enjoyed it."

When Halverson was asked if he gets nervous before he rides, he explained, "I do get a little nervous, but it's not a scared nervous. It's an I need to do my job kind of nervous."

Despite this being his first time at the Clearwater Rodeo, it's not his first time experiencing a bounty bull. He has competed in other rodeos, that offered the special prize.

The bounty bull is sponsored by Bearinger Tax and Accounting LLC,owned by Jarod and Tammy Bearinger.

The bounty bull bonus event started three years ago; one night Jarod Bearinger was thinking of how to get more bull riders to the local rodeo, and thought this would be a good idea. Bearinger likes bull riding and wants to see the best cowboy get on the best bull.

The rider who rides the bounty bull will get paid $1,000 if they ride for eight seconds.

If they fail to do that, the stock providers will get paid $250.

Bearinger stated, " We're just looking for a way to increase the bull riding, because everyone loves it, and thought this would be a good way to do it."

Which bull was harder to ride?

Halverson explained, "I wouldn't say the bounty bull was tougher than my first bull, but he was definitely a lot more fun."

With the extra cash received from the bounty bull, Halverson plans to compete in more rodeos down the road.