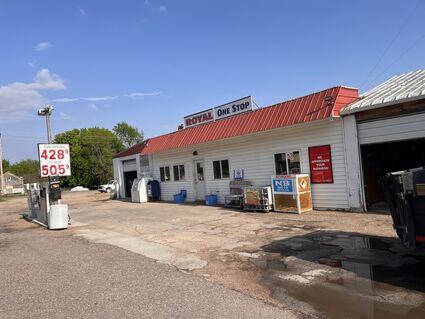 Gathering spot • Royal locals meet daily at Royal One Stop for conversation and cards. The convenience store is located at 1000 West Highway 20, in Royal.

Every morning, vehicles fill the lot at Royal One Stop, where customers are greeted at the door by a group of individuals playing cards. While the town's population has dwindled over the years, Royal One Stop continues to flourish.

The "Royal Centennial" outlines the history of the business. The convenience store has not always been called Royal One Stop. The business started in the early 1920s when Hiram and Louise Beal bought land from a Mr. Allen and built a service station and home on the property. They called

a funnel to transfer over. Beal eventually started receiving bulk deliveries that required him to upgrade to a 300-gallon tank. He always took oil and grease along.

It was documented in the "Royal Centenniel" that petroleum products used to be shipped in by barrels on the railroad. Beal would then put gas he remeasured into automobile tanks, using hand-operated pumps. Beal Oil Company started using modern advances for deliveries when Beal's sons-in-laws were employed.

After Beal's death, the family continued with the business until 1946, when Louise sold the property and service station to Thomas and Mary Dodds. The Dodds renamed the business Dodds Oil Company and operated it for many years. Their sons-in-laws, Hans Hofer and Warren Holm, made the addition of selling liquid fertlizer. As they got older, the couple decided to retire to Mesa, Arizona.

While they made the out-of-state transition, Dodds continued to lease the business to Hofer, until he was killed in an accident in the summer of 1972. Mrs. Hofer continued the business for awhile after his death, but as soon as the Dodd's were settled in Mesa, they put the business on the market.

Wendell and Leta Morrill purchased the business in March 1973. They received permission to continue with the Dodds Oil Company name and purchased the house as well. The Morrills were full-time farmers, so they employed Jakie Cole to serve as manager. In 1973, when there was a major concern about Arabian oil imports and shortages, the Morrills were concerned they could not get enough gasoline and diesel fuel for local customers. The business managed to survive and became known as a place to stop for gas, a drink, snack, or even the place to chat about the weather.

In 1995, Duaine and Nancy Brandt purchased Dodds Oil and changed the name to Brandt Oil Company.

Dwaine and Sherrill Halsey purchased the business from the Brandts on Jan. 2, 1997. The Halseys changed the name to what it is known as now, Royal One Stop. A car wash was added. The couple ran the store for a few years, selling to Corey and Tonya Curtis in September 2002. The Curtises owned Royal One Stop for 16 years, then sold it to the current owners, Dan and Chellie McElhaney in April 2018.

While there have been several changes throughout the years, Royal One Stop continues to offer numerous conveniences to customers, including gasoline, diesel fuel, oil, grease, belts, bolts, sandwiches, drinks, baked goods and any supplies their customers may be looking for.

“When the community got so small, it kind of turned into the Royal One Stop shop,” said Chellie McElhaney.

Royal One Stop is open Monday through Saturday, 7 a.m. to 6 p.m.

A small group of employees works at the store. The business receives a lot of traffic from locals, people passing through on U.S. Highway 20 and Grove Lake visitors.

“It has that hometown feeling. We keep it simple here and we try to provide the convenience of a store that people can come to,” stated McElhaney, as the card players around her patiently waited for her next play. “We’re a happening place. It’s all right here at the table. It’s based on your community and the rural people who do come here; they are the ones who keep us going.”