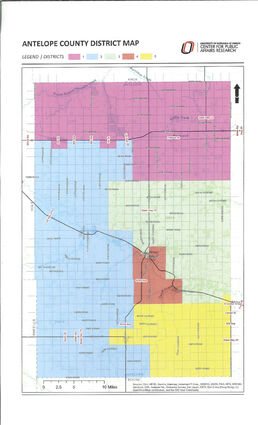 Those steps led to a Dec. 23 special meeting of the Antelope County commissioners, where a new redistricting map was given the final nod.

Commissioners originally approved the district map on Dec. 7; however, a discrepancy was noted in population between two districts.

Originally, district three was light and four was heavy, according to county clerk Lisa Payne.

"In discussion with the secretar of state's office, (Antelope County Attorney) Joe Abler and Josie Schafer (University of Nebraska-Omaha Center for Public Affairs Research), we decided to m...