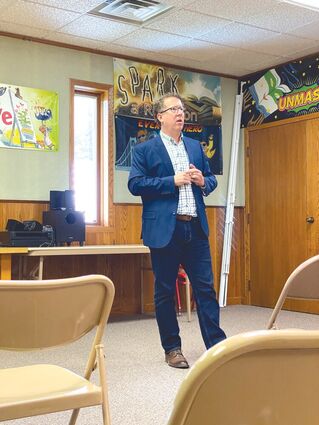 He told constituents it is "refreshing to meet with folks faceto- face, rather than by Zoom."

Smith spoke on a variety of topics, primarily driven by questions from audience members.

As a member of the tax writing committee, Smith said he is concerned about current tax proposals under consideration.

"It's a huge money grab." He said the capital gains taxes threaten multi-generation agriculture operations. "If a family had to sell off part of the operation to pay the taxes, it's a less-viable operation, especially in today's economy," he said. "I don't think the federal government is entitled to nealry half of the value of whatever's left after that exemption."

"Herein lies a dilemma by the government, in my opinion, politicians picking a number and these days, compensation includes more things than just a wage."

He cited the potential benefits and how they fit in the equation.

"I mean, there are a lot of variables here that the minimum wage does not consider," he said. In my opinion, the government should not be trying to tinker with mandates, prohibitions, and, basically more regulations. We have folks that want to get back into the workforce."

"We must maintain an environment that encourages investment, so thats, I think, an integral part of expanding broadbad, to fill the gaps. It can involve some public funds from time to time. We've been doing that somewhat with the universal service fund. When you see how the dollars are used by rural telephone and telecommunications cooperatives, it's pretty impressive and reaching some folks in some pretty remote areas.

When asked about system payments for telehealth visits, Smith said, several aspects of telehealth payment, at the federal level, have to do with Medicare reimbursement.

"We're working on that. I've reintroduced the Rush Act, that allows rural skilled-care facilities, with fragile residents, to be treated with telehealth, rather than having to transport a very fragile resident or patient in an ambulance, who knows how far, to get to an ER. Many times, we can achieve better outcomes, wit the telehealth and the efficiences associated with.

"We have some things brewing that, I think, are significant threats to economic opportunity. We need to make sure we pursue growth. I tell folks all the time across the district, my number one job is to do everything I can to ensure opportunity. It is not my job, should not be my job, cannot be my job to ensure a specific outcome for a specific people. It's cumbersome. It just doesn't work, especially from the federal level."

Smith did not cite any threats he considers interfering with economic growth.