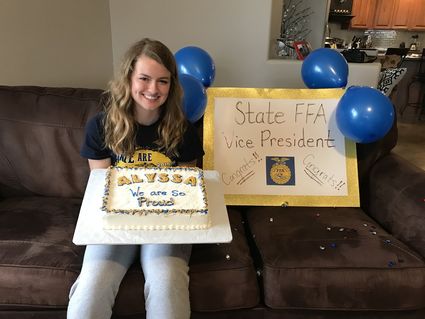 Agvocate • Clearwater resident Alyssa Moser celebrates her selection as a state FFA officer, following the announcement made online May 7. Moser, a member of the O'Neill FFA chapter, will represent Nebraska as a voting delegate at the 2020 National FFA Convention in October.

Instead of watching the big screen at Pinnacle Bank Arena in Lincoln for the announcement of the State FFA student leadership, Alyssa Moser, of Clearwater, discovered she was one of seven students selected as a state leader while she sat with family in their home's living room, via a Zoom call, May 7.

Moser, an O'Neill Public Schools senior, will serve as one of five vice presidents for the largest student-run organization in the world.

Moser's introduction to FFA began as a sophomore when she transferred to O'Neill Public.

Friends strongly encouraged her to take an ag class and get involved with the local chapter.

"I'd grown up around agriculture on our family farm, but FFA was the first organization I became a part of where the members were so passionate about advocating for ag," she said.

"I discovered my own passion for agriculture that I had no idea existed," she said.

According to the CDE/LDE handbook, "the primary goal of career and leadership development events is to develop individual college and career readiness skills through personal growth and premier leadership."

Critical thinking, decision-making skills, teamwork and communication are core anchors of the events.

In 2019, she qualified for state competition in senior prepared public speaking. She was part of O'Neill's livestock evaluation team, which placed in the top 10.

This year, she qualified in extemporaneous speaking and livestock management.

Then COVID-19 hit and the organization canceled the annual state convention, slated in Lincoln.

Moser had submitted a written application and commitment statement to be considered for a state officer position.

"You don't choose which office you are applying for," she said.

Nineteen students went through 13 rounds of preliminary interviews, in Kearney, March 5 through 7.

"On March 9, I got an email informing me that I was one of the 12 finalists selected to move on in the interviews," Moser said.

When the state convention was canceled, nominating committee members each selected their choices for the officer team.

Then came the May 7 moment and the Zoom call, with members of her local chapter and a few teachers.

"I couldn't believe it when I saw my picture show up on the screen," Moser said. "The six individuals I get to serve with this year are some of the coolest, hardest-working people I've ever met, and I can't wait to see what we accomplish as a team."

For the next year, Moser and other officers will facilitate workshops, visit chapters and meet with individuals in the ag industry.

She said part of their responsibilities include planning the 2021 state convention and representing Nebraska as voting delegates at the national convention in October.

"Our team has already begun training to get to know each other and strengthen our leadership skills."

The year-long commitment comes with challenges, especially vying for time with her first year of college.

Moser received a firsthand glimpse at the hard work it entails when her cousin served as state secretary.

"Serving as a state officer can be grueling. It takes a lot of time and energy, on top of getting adjusted to college as a freshman."

Moser will attend the University of Nebraska-Lincoln in the fall and will major in agricultural economics, on a pre-law track, with a minor in Engler Entrepreneurship.

According to Moser, she put a lot of thought into deciding to toss her hat in the ring for an officer position.

"I ultimately decided to run for state office because I want to give back to the organization that helped me realize my passion for agriculture and gave me my best friends. Some of my biggest role models are people I've met through FFA, and I want to be that person for someone," she said.

Serving as a state officer will help her build connections with others in the ag industry and strengthen her leadership skills.

"I'm hoping to gain more knowledge of what Nebraska farmers, ranchers and community members think needs to change about policies involving the ag industry, in order to better understand local perspectives about the industry," she said.

Eventually, she would like to intern on Capitol Hill, advocating for agriculture.

Moser said FFA gives students an opportunity to learn about more than agriculture.

"It's a place for students to learn how to think on their feet and it teaches the importance of hard work," she said. "The time I spent in the blue jacket is time that went much too quickly, and I'm so grateful to get the opportunity to spend another year wearing corduroy and representing Nebraska FFA." 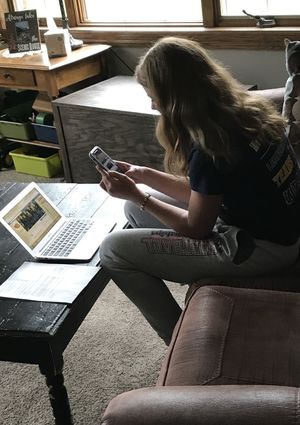